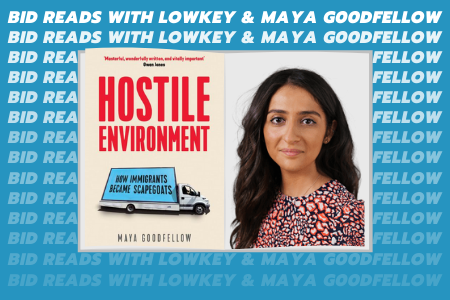 Join our new book club #BIDREADS to deepen your understanding of issues relating to detention and deportation. We'll read a new book every three months culminating in a Q&A with the author hosted by a very special guest.

Our first read is Maya Goodfellow's Hostile Environment: How Immigrants Became Scapegoats and we're delighted to announce that the online Q&A will be hosted by rapper and activist Lowkey on the 17th November.

To take part all you need to do is grab a copy of the book, get reading and register for the online event.

We can’t wait to hear what you think of the book and invite you to share your reflections and favourite quotes on social media using the hashtag #BIDREADS tagging @BIDDetention.

The UK government boasts that the aim of its immigration policy is the creation of a “hostile environment” for so-called “illegal immigrants”, while refugees drown in the Mediterranean and desperate people attempt to cross the Channel in flimsy boats and our media and politicians claim that “swarms” of migrants are entering Britain. Meanwhile, study after study confirms that immigration is not damaging the UK’s economy, nor putting a strain on public services, and yet immigration is blamed for all  Britain’s ills. At the same time  “concerns” about immigration are deemed legitimate across the political spectrum, with few exceptions. How did we get here?