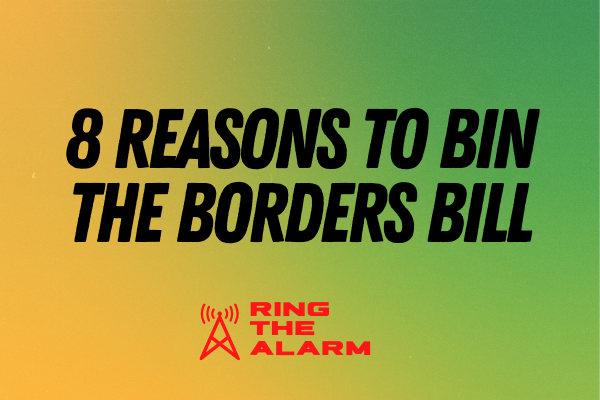 8 Reasons to Bin the Bill

As we launch our #RingTheAlarm campaign we share 8 reasons that the toxic Nationality & Borders Bill must be binned.
7 Dec 2021

This piece is part of our #RingTheAlarm campaign. To find out more about the Bill and how you can help stop it visit www.biduk.org/RingTheAlarm.

8 Reasons to Bin the Bill

If passed, the Nationality & Borders Bill will criminalise asylum seekers, erode the meagre rights of those subject to immigration control and sow division further into UK society. It seeks to inflame an already toxic debate about migration and seeks to further denigrate and stigmatise those who migrate. There are countless harmful paragraphs and clauses in this Bill but we’ve summarised our top 8 reasons to bin the Bill.

If passed, the Nationality & Borders Bill will completely undermine the entire notion of international protection. It disingenuously reinterprets the Refugee Convention in a restrictive way and has been found by the UNHCR to be in breach of International Law. It will criminalise people and deny them access to the asylum system solely on the basis of the route they travelled. Not only is this completely illegal but it is completely out of touch with the reality faced by those fleeing persecution whose right to make lifesaving journeys across borders are protected by the refugee convention.

2. A transition from a hostile environment to full-blown social segregation

The Bill marks a watershed moment in the transition from a hostile environment to full-blown social segregation. It will discriminate between refugees and leave the majority stuck in limbo for years, potentially segregated from the rest of society in isolated and unsanitary ‘accommodation centres’, unable to work or participate in society. People could also be flown thousands of miles away to offshore detention centres. As with the rollout of the Hostile Environment, the profound immediate and long-term impact this will have upon the fabric of society does not appear to have been considered.

3. More people will be locked up, for longer

The Bill will change the law on immigration detention, making it even more difficult for people to be released. This will affect everybody in detention including people with strong connections to the UK, who have families here, children here, people who themselves grew up here or were even born here, and who face removal to countries with which they have no connection.

Additionally if this Bill passes, it will create new criminal offences and lengthen maximum sentences for other existing offences continuing a trend begun by the Policing, Crime, Sentencing and Courts Bill. The new offences and heavier sentencing will be filtered through a criminal justice system whose racial biases are known and accepted. This will lead to more foreign nationals brought within the ambit of the UK’s automatic deportation system, under which any foreign national who receives a 12-month sentence must be considered for deportation. Cases will also be ‘certified’ so as to remove any right of appeal.

The Bill makes it more difficult for people subject to immigration control to challenge life-changing decisions taken by the Home Office. It introduces many more hurdles in what is already an incredibly dehumanising system, punishing late evidence or behaviour deemed to be ‘in bad faith’ and introducing demanding procedural requirements for those seeking to challenge their removal or deportation. Combined with the Policing, Crime, Sentencing and Courts Bill; the Judicial Review and Courts Bill; and the proposed overhaul of the Human Rights Act, we are witnessing a sinister and coordinated power grab. The government is seeking to make itself unchallengeable, silence dissent and erode the institutions of democracy that hold it to account.

5. The Home Office cannot be trusted with more power

As evidenced by the Windrush scandal, the Home Office already has excessive power that it can wield without meaningful external scrutiny. In the last 3 years, the Home Office has been found to have detained 914 people unlawfully and been required to pay out a total of £24.4 million in compensation to those individuals. We should not be giving it more power.

The Bill harms access to justice by introducing a set of truncated processes that place onerous requirements on applicants, and punishes late evidence or behaviour that the Home Office does not approve of. This will have a particularly detrimental effect on the most vulnerable – those with physical or mental health problems or survivors of torture, trafficking or other traumatic experiences.

7. Makes it easier to strip people of citizenship

At a late stage, the government has quietly introduced a clause that removes the requirement to inform people when they are being stripped of their citizenship. We are opposed to the increased use of draconian and discriminatory powers of citizenship stripping in recent years. Contrary to recent statements made by the Home Secretary, citizenship is a fundamental right, and rather than seeking to strip British people of their citizenship, the government should instead focus its efforts on removing barriers so that people are able to access the citizenship that they are legally entitled to.

8. There is an alternative

The UK must provide sanctuary to those forced to flee and give vulnerable people the opportunity to heal, it should enable families to stay together and afford everyone basic rights and the opportunity for rehabilitation.  People move for many reasons, including legacies of colonialism that we have not properly reckoned with in this country. To create cohesive communities in the UK we need a shift in culture and attitude at the Home Office of the kind recommended by Wendy Williams in her Windrush Lessons Learned Review.