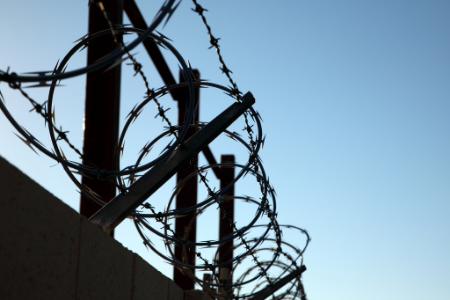 Dire conditions described by union of residents in Penally

The report​, prepared for the All-Party Parliamentary Group on Immigration Detention, is a detailed illustration of living conditions.
24 Dec 2020

Asylum seekers who have recently arrived in the UK have been housed in military barracks in Kent and Penally, in conditions that are “like a detention centre and are not safe or suitable places for people to live”, according to Camp Residents of Penally (CROP) – a union established among the residents.

The report, prepared for the All-Party Parliamentary Group on Immigration Detention, is a detailed illustration of living conditions that lack basic dignity and are not fit for human habitation by any standards. It is a damning indictment of the treatment of people arriving to the UK seeking sanctuary. It urges the government to reconsider this inappropriate use of the camps.

The barracks in Penally and Kent are run by private company Clearsprings Ready Homes, but according to CROP, much of the running of the camp is further outsourced to another company called NACCS, and security is provided by a different company.

Medical care is described as woefully inadequate and there is no social distancing or proper self-isolation procedure. Shower blocks are often dirty and lack privacy. Rooms are crowded and the only storage they contain are ‘long thin rusty metal lockers’. All amenities are in separate buildings from the sleeping quarters, meaning that residents have to go outside even to use the toilet. Residents continue to feel unsafe, not least because of the ‘aggressive racist protests at the site’.

In an Interviewwith corporate watch, CROP describe further appalling conditions: The food is poor – CROP describe undercooked boiled eggs, rice that is either under or over boiled and swimming in water, and chicken pieces that still have feathers attached. There are times when there is no drinking water available, and kettles that were donated by charities and used safely for a period of four weeks have now been removed by Clearsprings for ‘health and safety reasons’. Rooms are very cold as often the heaters do not work. Kitchen staff are disrespectful in their attitude and make no allowance for people’s lack of English.

Pictures taken by residents show the living quarters - a row of grey metal tubes behind a barbed wire fence. Others shows a residents washing clothes in a bin, and in small sinks.

The interview also describes the creation of the group and the education advocacy and activities they organise. They describe instances where the group has secured moves to proper, safer accommodation for people where this was particularly urgent for medical or other reasons.  CROP’s level of organisation and detailed reporting on and forceful critique of the conditions they are held in is inspiring. All too often frenzied debates around immigration policy ignores the voices of those who will be made to suffer.