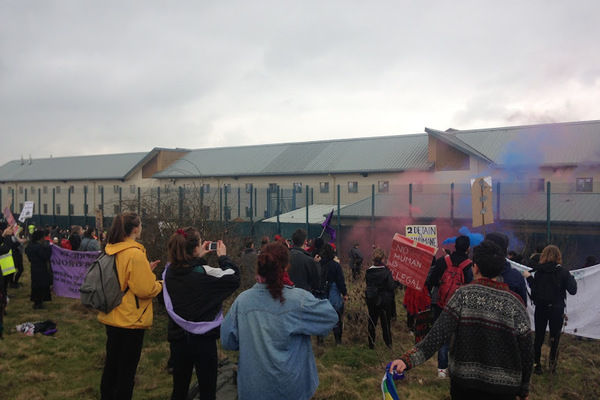 Our client, Anna*, tells her story from inside Yarl's Wood

Despite what the government has told us, Yarl’s Wood Immigration Removal Centre is still being used to detain women.
16 Oct 2020
Policy and Research

Anna had come to the UK from a Caribbean commonwealth country intending to have a short holiday and to visit her relatives. Due to the Covid-19 pandemic her work has been paused and so she took the chance to take a vacation in the UK and return in November. However, she was refused entry by border guards at Heathrow airport who did not believe her. “They thought I had the intention of working in the UK,” she said.

Anna was taken to the Sahara unit at Colnbrook Immigration Removal Centre, a small unit within the centre where women can be detained for short periods of time. She was taken there late at night and was not given any paperwork explaining the reason she was being detained.

The Home Office booked a flight back to her country of origin for the following day, but this was cancelled at the last minute because she was told that she did not have the necessary Covid test in order to get on the flight. Instead she was transferred back to Colnbrook detention centre.

I asked Anna how she felt when she was detained. “I felt violated. I felt helpless. I felt a lot of things. I cried myself to sleep for maybe 5 nights while I was there, I didn’t know the reason I just knew that I wasn’t accepted into the country and couldn’t be trusted.”

“It’s not right for the government, for them to be treating people this way. They literally have us like prisoners, especially at Colnbrook. You don’t have access to your property, you have to request everything. It felt very uncomfortable, especially as a woman”.

After being held in Colnbrook for over a week Anna was transferred to Yarl’s Wood Immigration Removal Centre. She said. “On the journey to Yarl’s Wood, they bring you in a cell van, like a criminal. It was cold, the seat was hard and uncomfortable.”

She told me there are other women there and they are kept separate from the men who are currently being detained. She told us that there is access to advice from Hibiscus and BID but she has not seen any solicitors in the centre. Anna has not made any efforts to remain in the UK or resist her removal, but she has been stuck in detention for over 2 weeks.

“I have never even gone to court for anything in my life but since I came here I have been treated like a convict. It’s very hard. The feeling I have… I don’t know how to explain it in words. It’s not a good treatment for people who are just trying to enjoy a vacation with friends and family.  ”

*A pseudonym has been used to protect our client’s identity.