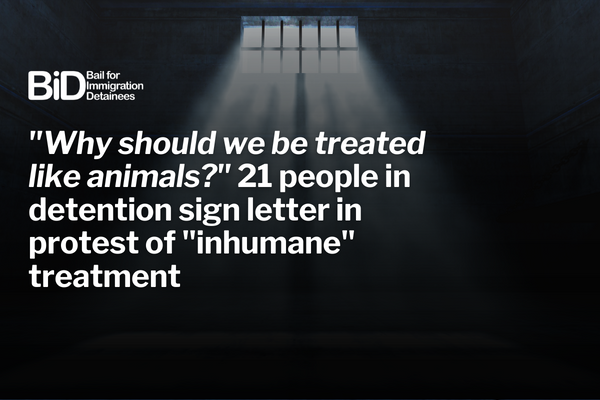 "Why should we be treated like animals?" A Letter from 21 people in detention

21 people have signed a letter to BID documenting the "inhumane treatment" they endured during the Harmondsworth power cut.
22 Nov 2022

A client has emailed us a letter he had written, signed by 21 people who were in Harmondsworth at the time of the power outage two weeks ago, complaining about the ‘inhumane’ treatment they had suffered. His letter reflects the testimony of many others that we have spoken to, who were in Harmondsworth at the time, including the account of the sister of a client that we published on our website.

As the letter ends “I cant believe this is happening in great Britain. We are champions on Human Rights around the world, and Human Rights abuse, but it is happening at Heathrow Immigration Centre”. You can read the full text of the letter below which is a chronological account of the incident.

On Friday, 4th November, the lights turned off at midnight during the night, and we were left in utter darkness. In the morning, they turned off the water. Our toilets were stinking because they could not flush and we could not wash our face or brush our teeth. The InterCom was turned off, so we could not reach out to officers. We were kept locked down in our cells without any breakfast. This is cruel and inhumane treatment, until 9:30am.

No dinner was served, so at 8:00 pm, some detainees refused to go back to their cells and started a fire and was demonstrating.

On Friday, 5th November, I was locked in my cell in the darkness.

At 7:00 am on Saturday, 5th November, I woke up, and the electricity was still not turned on. At 9 am, an officer came to our cells, threw a bag on the floor, saying Breakfast, and locked the door again.

At 12 pm, the electricity was turned back on, but there was still no hot water nor heating.

On Sunday, 6th November, detainees were still held in their cells without fresh air or hot water. When we asked the officers to let us out one by one for a shower, they told us they had been told not to give us a shower. I am smelling now.

16:00 on Sunday, we were taken from our cell and boarded a bus bound for Brook House detention centre. When we got there, we were advised that the centre was full. We spent a total of 5 hours and 37 minutes on the bus driving around and waiting outside detention centres before arriving at Yarl's Wood.

I can't believe this is happening in Great Britain. We are champions of Human Rights around the world and Human Rights abuse, but it is happening at Heathrow Immigration Centre at Colnbrook ByPass West Drayton, Middlesex UB71 0HB.