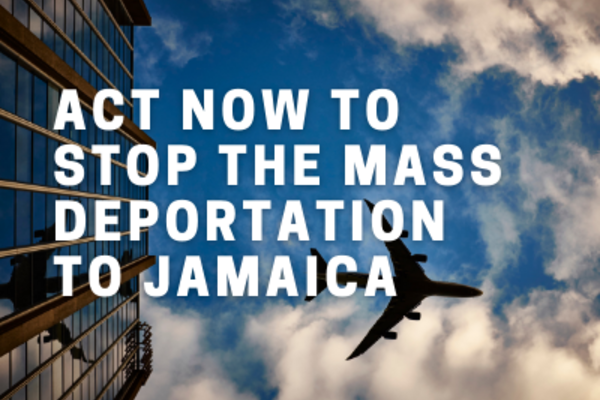 Next week's mass deportation flight to Jamaica on 18th May 2022 is an injustice that cannot be allowed to take place.

If it goes ahead the flight will tear apart Black British families & communities, traumatise children and exile people who are British in all but paperwork.

The harm this causes to families is documented powerfully by Families for Justice, a group of mothers, wives, partners and daughters who have experienced family separation as a result of deportation. As they state in their report Separated Families: Unjust Deportations and the Families Left Behind:

“Currently, UK deportation law requires that any person with nationality of another country, who serves a prison sentence of 12 months or longer, will automatically be targeted for deportation. Every member of Families for Justice has a loved one who has fallen under this law. The law doesn’t care if they have children and families here. It doesn’t care if they’ve lived here since they were kids themselves. This law has made many of us into single parents, depriving our children of their fathers and leaving us financially and socially disadvantaged, with no additional support from the Government”.

Many of those scheduled on next week's flight will have arrived as children and have been educated and raised here, and may have been excluded from citizenship by extortionate fees.

We are working with two clients who both arrived to the UK as toddlers with no family in Jamaica. Other charities, including Detention Action and Movement for Justice, have also reported similarly that they are in contact with several others who arrived in the UK as children. One person scheduled to be on the flight said:

“I don’t think I could survive in Jamaica, I have no one there all my family are here, everyone – I haven’t been to Jamaica since I was a baby.

I just want this plane ticket cancelled. You can’t send someone to a country with no support, no family, no nothing - especially when they’re suffering from mental health issues. I’m already integrated into UK life – it would be really hard for me. I suffer from depression because all this started when I was a teenager. My life has been hell the past years. It has been such a struggle I’ve been stopped from working and getting an education – how are you meant to pay for lawyers to get out of this situation when you can’t work? It doesn’t make any sense.

It’s racism – making people like myself who came here as babies, with no recollection of where we came from, leave the UK. I’m British. I was raised here. They’re trying to send me somewhere where I don’t know anyone – I don’t know how they can sleep at night, if they were in my shoes facing this injustice and racism they wouldn’t like it – it’s messed up – especially bearing in mind when they need people to rebuild the country its immigrants they call upon.”

Deporting Black British residents with strong ties to the UK to a former commonwealth country is one of the most striking examples of structural racism in modern-day Britain and it must be stopped.

Additionally, many people on this flight will not have had meaningful access to justice. Our six-monthly surveys into the availability of immigration advice and representation in detention demonstrate that immigration detainees routinely face deportation and permanent separation from their families, children, and the communities without having received any legal advice.

This is a direct consequence of the Legal Aid cutbacks in 2013 when family life claims were taken out of scope of legal aid, whilst private legal representation is prohibitively expensive especially given people facing deportation are prohibited from either working or accessing public funds.

For the reason listed above and many more, the flight must be stopped. We need your help to show MPs that their constituents will not stand for this injustice. It takes less than two minutes to email your MP using our handy tool and template.