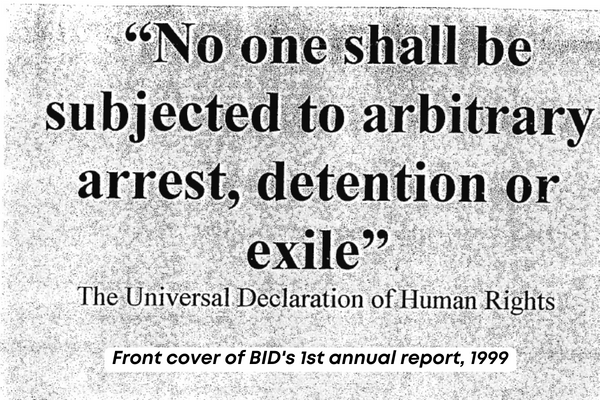 Read our wrap-up for 2022, the year in which BID hit the tragic yet significant milestone of having provided free legal advice to over 50,000 people.
22 Dec 2022

This year BID hit a tragic yet significant milestone. Since our founding in 1998, our dedicated team of legal managers, volunteers & pro bono barristers have provided free legal advice and representation to help over 50,000 people apply for immigration bail. 50,000 people too many.

In our first annual report from 1999, our founders described their determination “challenge the government’s failure to abide by international human rights standards.” Two decades later, these words feel even more poignant.

This year we have witnessed grave attacks on our human rights in the UK. The Nationality & Borders Act combined with the Police, Crime, Sentencing and Court Act 2022, the Judicial Review & Courts Act & the proposed overhaul of the Human Rights Act represents a cross-government power-grab that seeks to make the government unchallengeable, silence dissent and erode the institutions of democracy that hold it to account. As always, it is the marginalised who pay the greatest price for this powerplay.

But, we have also witnessed incredible resilience, resistance, coordination and creativity. From grounding the Rwanda flights and defeating the Bill of Rights to stopping plans to hold 1,500 asylum seekers in Linton-on-Ouse, we have shown the world that when the government pushes its anti-immigration agenda, there are people who will respond that believe in a better world.

As we resist plans to drastically increase the use of detention, it is a source of inspiration and hope to know we are part of a growing movement of people who share our vision of a world in which no one is deprived of their liberty for immigration purposes or deported from their home.

We would like to thank everyone who supported us this year and over the past two decades. As a small independent charity that receives no government funding, we really would be nothing without you.